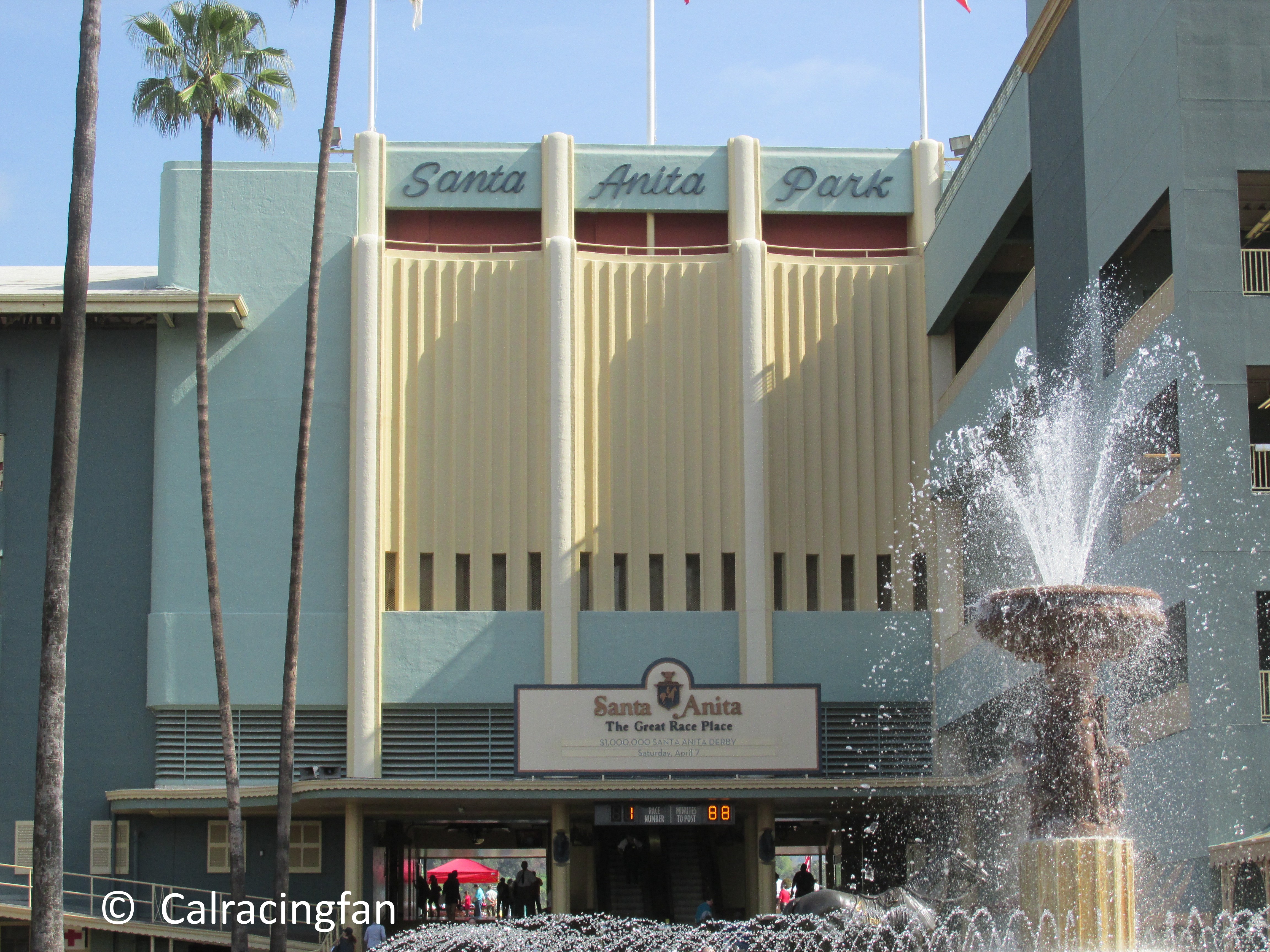 It has towered over the city of Arcadia since 1934.

The opening of its gates signaled the return of live racing to Southern California after nearly a quarter-century. And on its first opening day, the public welcomed it with open arms as thousands came to take in the sights.

Over time, it has transformed into the Southland's flagship track, a home to a who's who of great horses, jockeys and trainers. A true venue of champions, it is known around the world as one of the premier destinations for anyone involved in Thoroughbred racing.

To walk into the Art Deco grandstand is to be a part of past history while seeing the stars of tomorrow forge their reputations where so many have before them. And a look at the main track or turf course might summon the zenith of a landmark race or a virtuoso performance by a Hall of Fame horse.

Simply put, whenever you roam around Santa Anita Park, you will immerse yourself in decades of tradition and excellence.

How did it all begin? The story goes is that a dentist named Charles H. Strub came from San Francisco. A racing fan, Strub wanted to build a racetrack. At some point, he met up with movie producer Hal Roach, who had the same goal in mind. The two men joined forces, and with that followed the eventual formation of the Los Angeles Turf Club along with construction of a brand new venue.

Sitting not far from the site of the original Santa Anita Park, the new track inherited the name as it occupied ground once owned by breeder, racetrack operator, and city founder Elias J. "Lucky" Baldwin. As legislation paved the way for parimutuel wagering to be reinstated in 1933, that set the ball rolling for tracks to dot the Southland. And of the Big Three in the area, Santa Anita came first.

Opening on Christmas Day 1934, thousands were on hand as California racing entered its next chapter. The crowds kept coming throughout the meet, too, as enthusiasm spread all over Southern California. The inaugural meet was also highlighted by a race offering a $100,000 purse, which was big money in those days.

Of course, that race was none other than the Santa Anita Handicap. Run on February 23, 1935, twenty horses were on track competing to become the race's first winner. That honor went to Azucar and jockey George Woolf, and the duo captured the first installment of what has become the most prestigious horse race in the state.

After that first season, more races joined what became called the Big 'Cap and the Hundred Grander as staples of the season schedule. The San Antonio, San Juan Capistrano, the San Carlos and the Santa Anita Derby were all there at the beginning, and like the Big 'Cap, have remained there for at least most of the track's illustrious history.

Naturally, more sought after events have long since been held on Huntington Drive, with the La Brea, Malibu, and San Marcos among the major races contested every winter and spring. To be a stakes winner at Santa Anita is something that radiates a sense of pride and accomplishment. It just contains an aura and mystique like no other racetrack.

Santa Anita's reputation as one of the landmark plants in the sport continued into the 1930s and beyond. The biggest star in the early years was Seabiscuit, who thrilled crowds by winning stakes all over the country. The Biscuit's home track was Santa Anita, and before he retired, he won big races like the San Juan Capistrano and San Antonio Handicaps before getting his long-awaited victory in the 1940 Santa Anita Handicap while becoming the world's richest racehorse in retirement. The horse most synonymous with Santa Anita back then, Seabiscuit continues to be one of the track's enduring icons. His barn is still on the grounds in the present day, and you can find a life-size statue of him in the walking ring near the jockeys' room.

As the 1940s got underway, Santa Anita soon found itself in a different role. When the United States entered World War II, racing was suspended, and the track became a Japanese internment and later a training ground for soldiers. But racing would come back later in the decade, as stars like Busher and Honeymoon made their marks in front of the fans.

And the jockeys? After Woolf and John Longden, a young kid from Texas turned Santa Anita into his personal playground. From 1950-51 to the 1966-67 season, no one other than Bill Shoemaker claimed a jockey title in Arcadia. Well on his way to being regarded as the best jockey of all time, Shoemaker was in a class all his own throughout that period.

But other riders made their mark at Santa Anita over time, too. Jerry Lambert, Darrel McHargue, Sandy Hawley, Eddie Delahoussaye and Chris McCarron all succeeded Shoemaker as a Santa Anita riding champion, but none of them had the impact Laffit Pincay, Jr. did after Shoemaker. Pincay dominated the 1970s, winning most of the riding crowns, and he picked up more in the 1980s. Following him were talented riders like Kent Desormeaux, Victor Espinoza, David Flores, Corey Nakatani, Alex Solis, Gary Stevens and Patrick Valenzuela, all of whom won the title called the Golden Whip.

But no one is more accomplished at Santa Anita than the legendary Charlie Whittingham. Known as the Bald Eagle, this Hall of Fame horseman saddled champions like Ack Ack, Cougar II and Sunday Silence, along with 1986 Kentucky Derby champion Ferdinand and noted turf horse King Pellinore. Successful in sending horses to win on both turf and dirt, Charlie Whittingham was Santa Anita.

In terms of the Triple Crown, the track nicknamed The Great Race Place has produced a plethora of individual classic winners along with the Crown itself. Hill Gail, Determine, Swaps, Candy Spots, Majestic Prince, Snow Chief, Winning Colors, Sunday Silence, A.P. Indy, and I'll Have Another all have the distinction of being a Santa Anita Derby and Triple Crown race winner. And Affirmed and Justify both won the Santa Anita Derby before sweeping the Kentucky Derby, Preakness and Belmont Stakes.

Keep in mind that this is not even counting the horses who lost in the Santa Anita Derby that went on to win at least one of the classics.

And the memorable moments. Books can be written just on those. Along with Seabiscuit's Big 'Cap triumph, there was the great Round Table becoming the first winner of the Strub Series and Santa Anita Handicap in 1958 en route to being named Horse of the Year. And Johnny Longden getting the best sendoff to a racing career when he piloted George Royal to a repeat victory in front of tens of thousands in his final start, the 1966 San Juan Capistrano Handicap.

Thirteen years later, Affirmed became the first Triple Crown winner to take the Santa Anita Handicap, and John Henry later became the race's first two-time winner. And in 1980, the awesome Spectacular Bid went undefeated at Santa Anita as he followed Round Table as a Strub Series champion and Big 'Cap winner in his Horse of the Year campaign.

Following those greats were Winning Colors, who is the only horse to win both the Santa Anita Oaks and Santa Anita Derby. The hugely popular Lava Man became a two-time Big 'Cap winner, and Game On Dude did one better in 2014 when he became the race's grand champion by winning it for a third time.

And arguably the greatest moment in Santa Anita history came in the 2009 Breeders' Cup Classic as the legendary Zenyatta charged on the outside down the stretch to a deafening roar from the crowd as she beat the boys in the big event. An instant classic of a race, Zenyatta became a legend the moment she won.

As is the case with any racetrack covered in history, Santa Anita has been part of the path for countless champions, with many of the aformentioned names all becoming a divisional winner at least once in their careers. And this goes for both human and equine. If you make an impact at Santa Anita, you have made an impact in the big leagues.

Along with being one of the nation's most important tracks, Santa Anita has been the site of some unique events. It hosted the equestrian events at the 1984 Olympic Games, and hosted the Breeders' Cup for the first time in 1986. It has since gone on to host the big year-end extravaganza a record ten times, again confirming its stature in Thoroughbred racing.

Speaking of unique, Santa Anita also has the distinction of having the only course with a right-hand turn in North America. Built in the 1950s, the El Camino Real turf course features a hillside component that has been very popular with racing fans over the years. Much like Belmont Park has its mammoth, sweeping turns and Del Mar has its Mission-style architecture, a mention of the turf course with the right-handed turn will prompt fans to think of Santa Anita.

Now in the 21st century, Santa Anita continues to be a landing ground for up and coming horses, jockeys and trainers while also being the domain of the present day greats. The track continues to be held in great reverence, as crowds show up in droves for big race days like opening day, the Big 'Cap and Santa Anita Derby day, and money continues to be wagered in abundance. Santa Anita still commands attention to this day.

When someone sees Santa Anita along Huntington Drive, they see something special. It is like a treasure handed down over generations, for people to enjoy and interact with. It becomes a part of them. Once it enters your heart, it will not leave.

Santa Anita is really more than a racetrack. It is more like a member of the family. And many are richer for having it in their lives.